As he drove his big pick-up truck around the circle at Friends Landing, the furrowed brow and tilted head said he wasn’t quite sure what he was seeing. We actually fooled him. You’d think at 70 there wouldn’t be much that could get past my brother Tom. But the fact that his son had planned a birthday picnic, and that we’d made the trip up from Portland, came as a complete surprise. 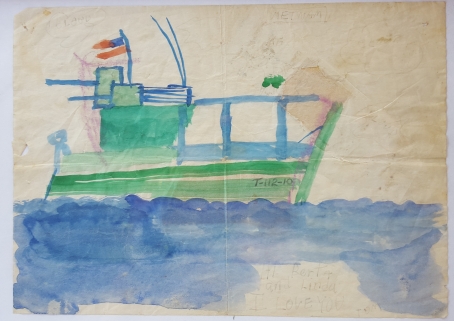 We ate chicken and potato salad and fruit salad and baked beans and chips and, of course, birthday cake. Then he opened gifts—I got him a piece of petrified wood because it’s the only thing I could find older than him. He may be the big seven-o, but he’s young at heart. He looked stupendous in his birthday crown. In all likelihood, he’ll outlive the rest of us though he’s the oldest of us five kids. One wonderful memory of the day was when my sister Berta brought out a framed picture of a watercolor he had sent us both when we were just little kids and he was stationed in Vietnam. I don’t remember it, but she had kept it all these years.

After seventy
A new season of our lives
Has only begun

I pondered several picnics I could have written about for today’s Haibun prompt at dVerse Poets Pub, but in the end I settled on this one from last summer.

I am a Jesus Freak, and I don't care who knows it. I am a wife, mother, sister, aunt, daughter, and friend. My blood family is only part of the larger family of Christ that I belong to. I love to write, especially about my dear Savior.
View all posts by Linda Kruschke →
This entry was posted in Poetry and tagged Birthday, Brothers, dVerse Poets Pub, Family, Haibun, Haiku, Life, NaPoWriMo2019, Poem, Poems, Poetry, Sisters. Bookmark the permalink.

31 Responses to The Big Seven-O

I love comments, so be sure to let me know what you think about this post below. Cancel reply

This site uses Akismet to reduce spam. Learn how your comment data is processed.